For the time period covered by the records on this site, the Waldensians followed a very firm naming pattern. Exceptions to it were exceptionally rare.

This is the pattern:

In addition, if a man’s first wife died, a second wife’s first daughter was given the first name of his first wife.

Here are a few examples of how the pattern worked:

Example 1: The Family of Paul GARDIOL:

Suppose you descend from Paul Gardiol, of Roccapiatta (a Waldensian village in the Valleys; English: "Flatrock").

By following the research pro­cedures outlined on this site, you dis­cover that he married Marguerite Sarret, daughter of deceased Pierre, of San Giovanni.

The Waldensian parish registers show that they had the following children:

Again by following the procedures on this site, you find that Paul and Marguerite were married in 1691.

You also extend your Gardiol pedigree and discover that the father of the above family (Paul) was the son of another Paul. From the will of this earlier Paul, you learn that he was married twice. He and his first wife Anna had three sons and a daughter.

He and his second wife, Martha had five more sons (including your Paul) and three daughters. According to the naming pattern, each of this earlier Paul's eight sons should name his oldest son Paul; and each of the sons should also name his oldest daughter after his mother, either Anna (the first wife) or Martha (the second one). That would mean that the earlier Paul could have as many as eight grandsons named Paul Gardiol!

The above list of the children of Paul Gardiol, son of the Paul who married twice, shows that this family adhered to the naming pattern. The oldest child, Marthe (French form of Martha), was named for Paul's mother (the second wife), the child's paternal grandmother. The second child, Paul, was named for the father's father, the child's paternal grandfather.

Gaps between the children suggest that a son, named Pierre after his maternal grandfather, was likely born in 1698 or 1699, or between 1701-1704, but died young. That likelihood is increased by discovering that the third child in the above list, Jeanne, was named after her maternal grandmother, the wife of Pierre Sarret. 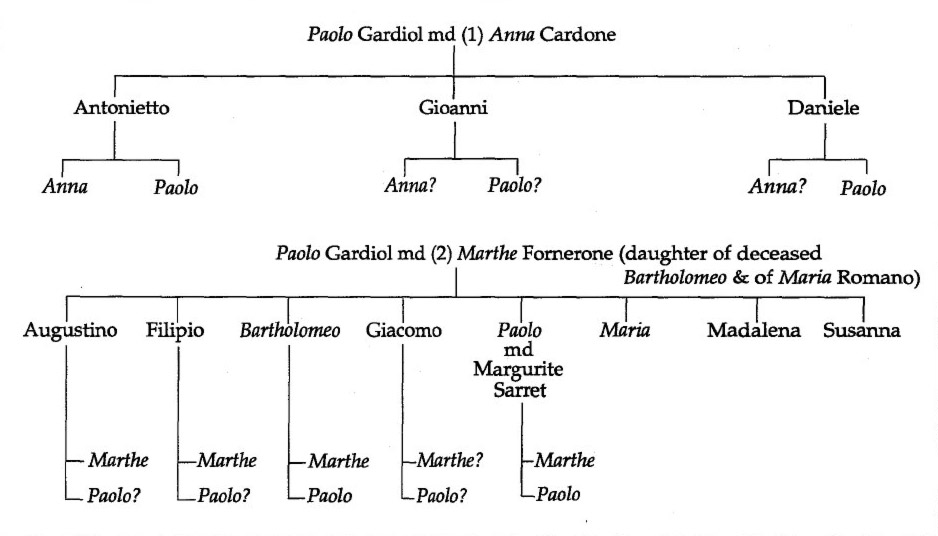 Of course, Paolo's daughters who had two sons would name the second one after him and their second daughter after their mother, but all these would have different surnames.

Example 2: The Family of Jean MALAN

Suppose that you descend from Jean Malan, of San Giovanni and his wife Marie REYMONDET-JOURDAN.

From the Parish Registers, you learned that:

The parish registers also revealed the marriage and death dates, and most of the persons they married.

Notice the degree to which this family also follows the Waldensian naming pattern:

We have found only one widespread departure from the naming pattern in this generation—the generation that immediately followed the imprisonment and exile. It seems that the survivors were assisted at some point—in prison, perhaps, or maybe in Switzerland—by someone whose assistance had saved their lives, and in gratitude named their second child after that person who rendered aid in such a critical time.

Therefore, except for the second son, who seems to have been named for a benefactor during the imprisonment or exile, the children in this family conform to the naming pattern.

It is crucial to your successful research that you understand this naming pattern. Knowing the pattern can help you distinguish between two potential ancestors with the same name(s), because you can depend on families following that pattern.