The Historical Novel, Rora, by James Byron Huggins –
A Glimpse into Waldensian Life in the Mid-1600s

If you would like an exciting glimpse into the lives of your Waldensian ancestors in the mid-1600s, get a copy of the historical novel Rora by acclaimed author James Byron Huggins.

Rora, by James Byron Huggins, published 2001 by Lion’s Head Publishing, Little Rock Arkansas (Do an internet search for Rora by Huggins to locate a copy to purchase; or have your nearest library in the Interlibrary Loan system request a library copy for you to read.)

Rora is historical fiction—a novel based upon historical fact—centered on the exploits of the greatest of all Waldensian military heroes, Captain Josuè Janavel (in the novel called Joshua Gianavello—a strange combining of the English form of his first name and the Italian form of his last name).

Huggins’ own life story reads like his novels—full of action and danger. He graduated from Troy State University with a degree in English and journalism and worked as a reporter, winning several awards for his writing.

With a desire to help persecuted Christians in Eastern Europe, he moved to Texas to work with an underground movement and helped to set up a system to smuggle information into and out of Iron Curtain countries. After two years, he was finally able to leave the U.S. and did dangerous covert operations in Romania. After his return to the States, he worked again in journalism and then in the Huntsville, Alabama police department.

And after winning more awards for writing and his police work, Huggins turned to writing novels. His novels are action-packed and fast-moving, the tension constantly building to the climax.

Rora focuses on the astonishing life of Josuè Janavel (Italian: Giosuè Gianavello), who led a small band of untrained Waldensians against the determined 1655 efforts of the Duke of Savoy to exterminate the Waldensians and to eradicate all evidence that such a group had ever existed in his realm. But all the Duke’s resources and military expertise—a trained, experienced army of 6,000—could not conquer the faith, ingenuity, and determination of Janavel and his small band.

Huggins did a lot of research before writing the novel. For the most part, it is true to historical fact—and the astonishing impact the Waldensian resistance had on the international scene, involving Cromwell and Milton in England and Cardinal Mazarin in France.

Janavel’s men—just a few dozen of them—were untrained in military tactics but knew their rugged mountain terrain very well, and with Janavel’s instinctive comprehension of military strategy, his men defeat, time after time, the thousands of the Duke’s trained troops, reinforced by mercenaries from as far away as Ireland.

But as a thoroughly documented 11th-great-grandson of Captain Janavel, I spotted some errors—errors of some significance genealogically, though not in terms of the flow of the novel.

At the end of the novel, Huggins added an “Author’s Note on Translation,” in which he most notably refers to the contradictory evidence about the name of Janavel’s wife. While it is true that later, secondary sources (the tradition and legend that grows up around any hero’s life) give her various names, there are a number of primary sources that identify her—and their children—quite precisely.

And since this website is devoted to family history or genealogy, this family is a prime example as to how the various sources discussed here can help us better identify our Waldensian ancestors. Here, we will only name a few of those sources to provide evidence of the Captain’s family and the fact that his wife and daughters were not “burned at the stake in May 1655” (novel, pages 431 and 434)).

But the Janavel family will serve as an example as other sections of this site discuss the various types of records that can help us identify our Waldensian ancestors.

Huggins decided, based upon a later French source, to call Janavel’s wife Angela because, as he explains that source “seemed most reliable” (page 471).

When we turn to the surviving primary records, however—in this case, the notary records—we find several acts that clearly identify the family.

Let’s consider a few of the acts in the notary records that clearly identify the members of this family. My English rendition of the act comes first, followed by the abstract of the original act, in its native Italian, indented for easier access. The source is also cited in detail—the town, the volume, the page number and date, so that anyone can quickly check the source, if desired:

Consider all the details we learn about them from this single act: 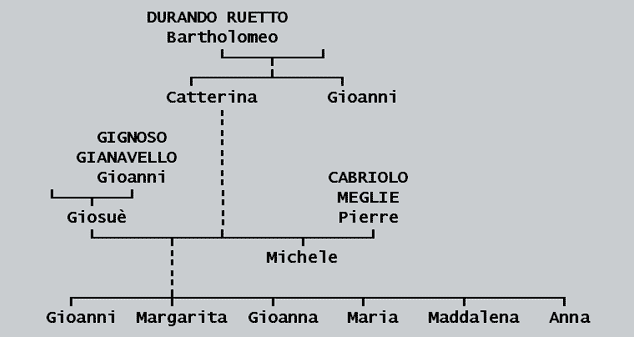 3 - Quittance naming Bartholomeo CHABRIOL son of Catterina - and of deceased Pierre of Torre Pellice; his step-father Giosue GIGNOUS-JANAVEL son of deceased Gioanni of Luserna; deceased Michele one of the children of said Catterina’s 1st marriage; said Bartholomeo declaring that his mother Catterina had 7 children by her 1st husband and 6 by her 2nd.

From this act, we learn that Catterina and her first husband had also had a son Bartholomeo, who declares that his mother (Catterina) had 7 children by her first husband and six by Giosuè JANAVEL. Because Bartholomeo and deceased Michele are both named in this act (as deceased Michele was in a previous act), this suggests that the other four children by that first marriage, unnamed here, were probably girls and probably died before reaching the age of marriageability. Further, Catterina obviously was still living in 1661. The fact that Catterina had so many children by her first marriage also suggests that she was older than Giosuè.

This act adds these new facts to our knowledge about Giosuè’s family:

You may have noted that the first act cited above identified Giosuè’s son as Gioanni, not Jacob as in the novel (page 16 and thereafter).

You may also have noticed that Giosuè and his father Gioanni are consistently described in the notary acts as being from Luserna, not from Rorà. His Rorà holdings apparently came through his wife’s inheritance.

That fact is supported by the listings of Rorà town officers and heads of households during the annual Town Council meetings, held in each Waldensian village. The lists do not survive from all of the town councils, but of the 18 Town Council listings in the Rorà notary records, dating from 22 December 1618 through 1 July 1660, the name JANAVEL (or any of its variants) never appears.

There are a few other factual errors in the novel that can be corrected as well:

Waldensians in the 1600s did not bear a “coat of arms” (page 76 in the novel), nor would any of them have worn a “golden cross” (page 159). Waldensian beliefs then, as well as before and after Janavel’s time, renounced both such practices as following worldly ways, contrary to the teachings of Jesus.

In spite of the above corrections to the identities of his family members and the beliefs and practices of the Waldensians of that time, Rorais an engaging book, well worth reading.

It will truly help you understand better the life and times of your Waldensian ancestors.