The 1481 Affirmation of Freedom for Angrogna Families

On 4 February 1481, Philibert I, Duke of Savoy (reigned 1472-1482), issued a proclamation reaffirming the freedoms of the heads of families of Angrogna. That was 11 years before Columbus discovered the “New World”!

The heads of families in Angrogna had complained to the Duke that their local lords were abusing their rights. Those local lords were the lords of Luserna and, more specifically, the Rorenghi, lords of Angrogna.

In exchange for one pound of wax per year—which he would use to validate or “seal” his official documents, in the manner of the ancient Roman Empire—the Duke reaffirmed those rights. This is evidence that these rights were not then “new,” for the Duke was reaffirming rights these men had already held; and also that these men and their families were not serfs, but were free, even though they proffered their loyalty to their local lords.

In addition to the wax, the Duke would use the occasion to confirm his own authority over those local lords—and any other local lords in his domain who wondered about the Duke’s power to control them. .

The act mandates that anyone abridging the freedoms of these citizens was to be publicly flogged. He specifically states that his mandate is to “preserve them from the undeserved and illegal oppression.”

There probably aren’t enough intervening documents that survive to permit your documenting your direct ancestry to one of these men. But it is of interest to note at least the surnames of those in Angrogna at that early time.

The names of the 35 Angrogna heads of families are as follows:

The original document, on parchment, is still preserved and is very large in size. We reproduce here only the date panel, the first part of the declaration showing the decorative “P” beginning the Duke’s name (Philibert), and the first few lines that include the names of the heads of families. 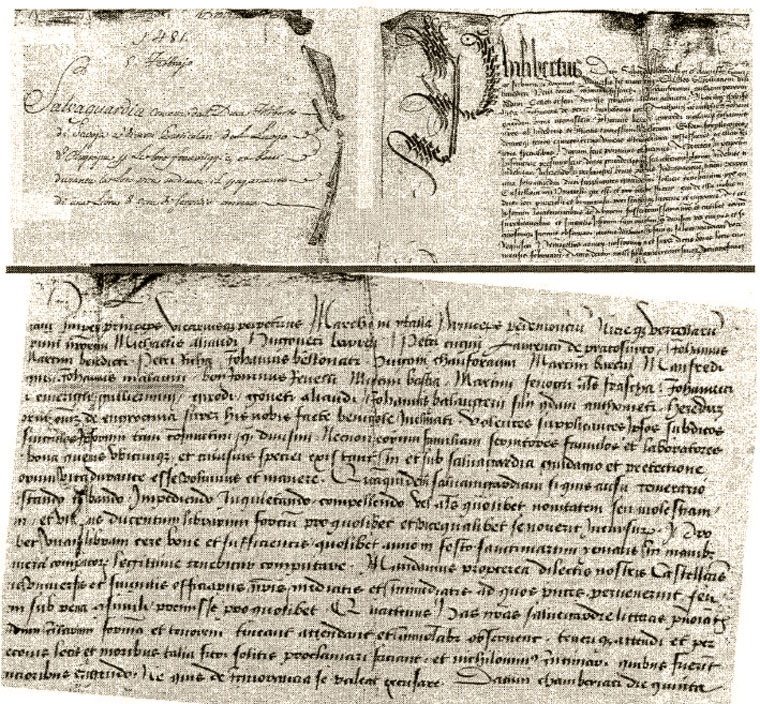