As you already know, good research practice dictates that you should not be satisfied with merely finding a family group record, or any other compiled record, of your ancestors. After all, compiled records are a secondary source only. Beyond good research practice, you’ll undoubtedly want to obtain copies of original entries that deal directly with those you descend from. For most, that carries a deeply spiritual dimension; for others, it's at least an emotional one. There's something intrinsically moving about gazing upon an actual copy of a record about an ancestor, made in his or her lifetime.

The later Parish Register entries were made on pre-printed forms, the pastor filling in the blanks with the individual details; but earlier records are freehand, simply written out, one after another. Examples are provided in the Parish Registers section on this site.

As always in family history research, you should begin with the latest event (death or burial, unless the person is still living) and move systematically through the earlier events (normally, marriage, then birth or christening).

You will find that the records in the parish registers are grouped: christenings or births together, covering a given period of time. Marriages are also listed together, for a given period of time, but separately from the births. And burials are listed separately from both births and marriages. Usually, the groupings are by year: the christenings for the year and then for the next year, and so on.

When you come to the earliest generation of your ancestors covered by the parish registers, you'll want to check the original entries for clues to extend your pedigree. This time, you should check the entries for all the children on the family group record, not just the entries for your direct ancestors. To continue your research, you will need all the clues you can find.

The table below provides the microfilm numbers of the Waldensian parish registers.

If you first obtained a copy of the typed Family Group Record(s), using the filmed parish registers will be much easier for you. Instead of having to skim every record on the microfilm roll in search of your ancestor, you can instead use the birth date you found to quickly scan for the year and then the month before looking more closely for the name you desire.

Note: The smallest hamlets are included in the nearby larger parish. For example, to find Villasecca (French: Ville Seche; “Dry Town”), you would need to search in the parish of Perrero (Perrier).

In the following table, the French form of the parish name is given in parentheses, as you may encounter that form in your family traditions or the records. "Time" indicates the earliest entries in the parish register and the latest year included in the microfilming. "Reels" indicates the total number of reels of microfilm for the parish. The final column shows the FHL microfilm numbers by event type. A "V" in this final column signifies that the microfilm is in the vault. This means the film will have to be retrieved for you if you visit the FHL in Salt Lake City; there will be a delay (at least one-half day) in getting it. If you order the microfilm through the internet, there will be no such delay, as it is mailed from the Vault area to your Family History Center.

Some microfilm readers have a zoom lens or other means for enlarging the image. This often makes the document easier to decipher. Many researchers carry a magnifying glass with them, using it to study details of a document more closely.

But sometimes the film image is so light it is difficult to discern much at all. That usually is because the original writing is so faint it doesn't photograph well. I carry a few blank pages of colored paper—blue or gold work well—with me when I will use a microfilm. I have found that placing the colored paper on the screen where the image is projected—right where I’d read the document—helps clarify the document considerably.

We can provide here only a brief overview of key French words, phrases, and numbers.

The document below is a death certificate (from FHL film 193404), chosen from the later records, using a pre-printed form. That permits you to see what the forms look like, as well as to begin becoming familiar with the handwriting. 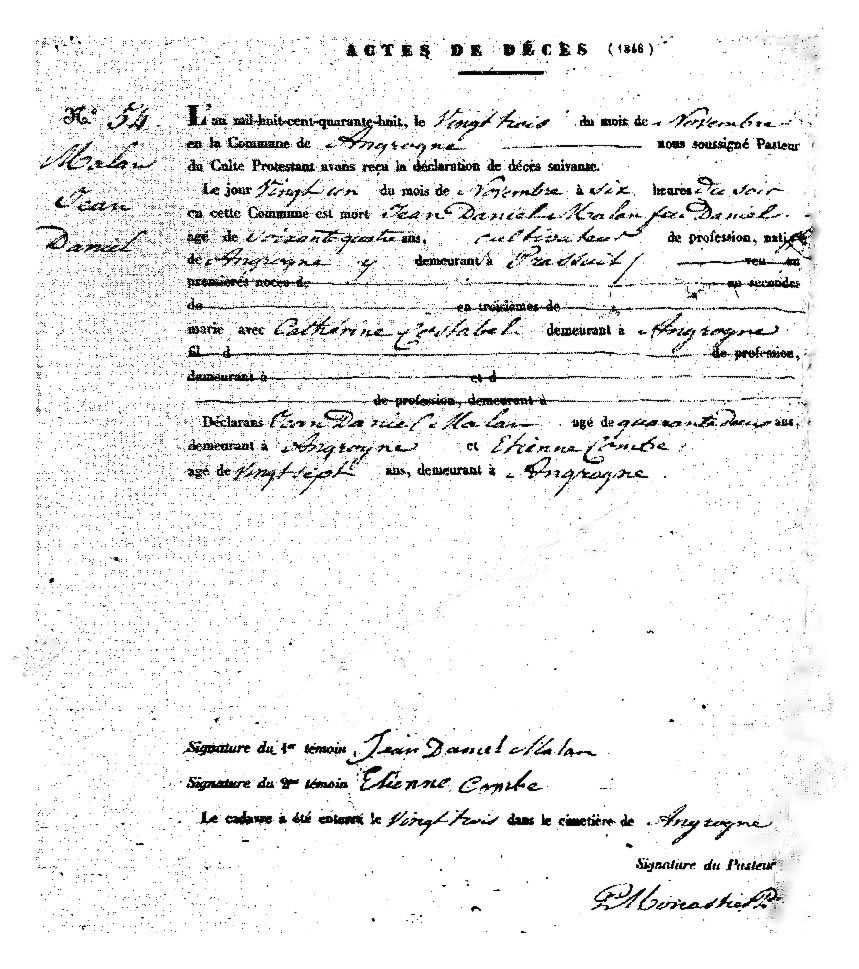 To assist you in identifying key information in documents you find about your own ancestors, here is a translation of that document:

No. 54 Malan Jean Daniel The year one thousand-eight-hundred-forty-eight, the twenty-third of the month of November in the community of Angrogna we the undersigned Pastor of the Protestant Church have received notice of the following death.

Signature of the 1st witness Jean Daniel Malan [son of the deceased]
Signature of the 2nd witness Etienne Combe
The body was buried the twenty-second in the Angrogna cemetery.

This document gives us interesting additional details about Jean Daniel Malan: the date and hour he died, and where; where he was born and where he resided; his wife's and his father's names; and his profession.

The next document shows a typical marriage entry, this one is from film 193399. It is an example of the earlier, freeform records.

Because it is freehand, I include here a transcription (in French) as well as the translation:

Jean Daniel Malan son of Daniel of this Church [parish], has married Pauline daughter of Jean Combe, also of this Church, and the said marriage was publicly performed at St. Laurent the 28 April 1825.

Finally, here is a birth and christening record, also from FHL film 193399, with its transcription and translation as well. We'll discuss the dates shortly.

Jean Daniel Malan dead [crossed out; an erroneous notation by the pastor] son of Jean Daniel [son] of Daniel, & of Catherine Costabel his wife, was born the 20 9vre [November] 1804, & the 2 Xbr [December] of the present [year] was presented for holy baptism by Joseph Costabel and Catherine Bastie.

We learn much from this document as well: the child's parents, his paternal grandfather, his birth and christening dates. In addition, we can expect that his sponsors, Joseph Costabel and Catherine Bastie, are close relatives—that was normally the case for Waldensians. Other documents should disclose whatever that relationship might be.

You should carefully study the translations provided above. They will not only help you recognize typical wording in these documents, but also learn to recognize the shapes of letters and numbers.

Notice in particular the abbreviations for the months in the last document. At that point in time, January was not the first month of the year; March was. Therefore, the ninth month was November; in fact the root of the word "November" means nine. December was the tenth month, and the root of "December" means ten.

To accurately decipher the dates in the documents, you must use this system. It affects the months of September (sept = seventh), October (oct = eighth), November (nov = ninth), and December (dec = tenth). The other months will either be written out or put in numbers, rather than a combination of number and letters as these four months often are.

What to do next

As you trace your Waldensian ancestor in the Parish Registers, you will add more and more Waldensian surnames to your ancestry. In fact, you should generally increase your number of Waldensian surnames by one in each generation—unless the wife/mother’s maiden surname is not revealed in the records or else her maiden surname was the same as a surname already in your pedigree. (That happens quite often, for the Waldensians were restricted for very long periods of time to their small Valleys.)

When you have finished tracing your Waldensian ancestors—each of your Waldensian surnames—you should have each ancestral line back to about 1700, and perhaps even well into the 1600s. Your next step will be to continue your search, first in the two major sources of Exile Records and then in the Notary Records.

To continue your search using the Exile Records, click HERE.